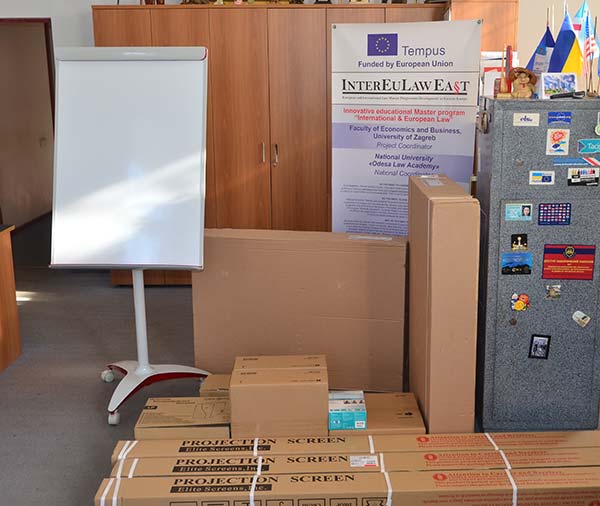 Within the frameworks of TEMPUS IV project“Development of Master's Program in European and International Law in East Europe “InterEULawEast” modern multimedia equipment was installed in three auditoriums of University. First of all, audiences will be used by students who study in the magistracy with the corresponding specialization.

The use of multimedia equipment will promote the introduction of modern teaching methods.

The creation of specialized audiences is going to ensure the preservation and multiplication of the results of TEMPUS IV projects“Development of Master's Program in European and International Law in East Europe “InterEULawEast”.

In the framework of the TEMPUS PROJECT IV Program "Development of master's program in European and International Law in Eastern Europe - InterEULawEast", teachers of the National University "Odessa Law Academy", during 6–9 December 2016 lectured to the undergraduate and postgraduate students of the Donetsk National University.

They gave lectures on many sensitive topics of the European Union law, international, law and international relations, such as: ‘International Criminal Law and Ukraine’; History of the European economic integration and the creation of the EU internal market; ‘Free movement of goods as a key principle of the EU Internal market’; Free movement of the workers and the definion of the ‘market citizenship’; ‘Association Agreement between Ukraine and European Union: challenges and perspectives’; ‘The challenges of the European diplomacy in the XXI century: case –studies in Afghanistan, Iraq and Syria’; ‘European diplomacy and the problem of the Cyprus’.

The congress was attended by about 100 legal students from different parts of Ukraine – Kharkov, Lviv, Poltava, Uzhgorod, Kiev, Dnieper, Odessa, Irpen and others. This event was also visited by guests from ELSA Republic of Moldova.

National Congress is the statutory event of the association, during which the most important decisions regarding the functioning and operation of the network are made, and also members of national government are elected.

Vice-rector of International Relations of National University "Odessa Law Academy" Professor Vyacheslav Tulyakov took part in the plenary session of the congress. In his speech he talked about the history and modernity of Odessa School of Law, modern requirements for high legal education.

21, October, 2016 at the National University “Odesa Law Academy” it took part International scientific Conference “Modern legal education: experience of the past – sight in the future”. The main purpose of the Conference is discussion of topical issues of legal duration with the context of challenges of the 21. Century. In the Conference famous lawyers from Belorussia, Latvia, Poland, Croatia, Ukraine took part. Within the Conference there was the visit of the Coordinator of the Tempus project “Development of the Master Program in International and European Law Program in the Eastern Europe “ – InterEULawEast, Head of the Department of the Faculty of Economics and Business of Zagreb University Doctor Hana Horak.

Doctor Horak became one the most active participant foreign participants of the Conference. Her report on the topic “Law schools in the 21. Century: role, perspectives and challenges”, in which she stressed on the modern requirements to higher legal education, paid attention during plenary session and out as well http://reporter.od.ua/v-yurakademii-proshla-mezhdunarodnaya-konferentsiya/

On September 1, 2016 classes of the first Ukrainian English-language Master’s Program “Master of European and International Law” have begun.

15 students of the National University “Odessa Academy of Law” who are fluent in English and have extensive experience in international cooperation were enrolled in this year’s program.

In September 2016 a new Magister program in International and EU Law begins at the University. All the courses for our students will be taught in English. It is necessary to create the corresponding methodological provision. In the end of three years of work, the first for our team textbook “European Union Law” (Voronezh, 2016) was issued.

Professors Biriukov P. and Tulyakov V. edited the textbook. It was approved and got the recommendations for publication from the representatives of the international consortium of universities – the participants of the TEMPUS IV projects “Development of Master’s Program in European and International Law in East Europe “InterEULawEast”. Among the authors are representatives of the Odessa Legal School professors Tulyakov. V. and Antsupova T., associate professors Pashkovskiy N., Akimenko U., Gladenenko A., Kryvtsova I.

Under the auspices of a consortium of European universities there was issued a new volume of magazine INTEREULAWEAST Journal Vol. 3, Issue 1, June 2016. in this volume of magazine an article of representatives of Odessa legal school Leonova Kristina (4th year student of the Faculty of Civil and Economic Justice) and Skorokhod Vlada (4th year of Judicial and Administrative Justice) was published. We sincerely congratulate the young scholars with their first step to the European recognition.

The electronic version of the magazine INTEREULAWEAST JOURNAL available on the Internet link http://web.efzg.hr/dok/casopisi%20efzg/INTEREULAWEAST//KB.pdf

INTEREULAWEAST was created in the frameworks of implementation of TEMPUS IV project in European and International Law in East Europe – “InterEULawEast”. It publishes the researches on problems of integrative and commercial law of Europe in English. The next year it is planned the notation of the magazine to SCOPUS. During the last meeting of the editorial board it was decided to give one issue annually for publishing of works of representatives of our university.

Contemporary lawyer and manager, political scientist and journalist cannot be regarded as qualified one without foreign language proficiency of his professional orientation. That is why for more than 10 years in the University there has been developing and implementing the program of preparation of Bachelors and Masters in foreign languages. S. V. Kivalov initiated this program.

In the frameworks of particular specializations such as European integration it is necessary to provide assistance in mastering professional terminology not only to university graduates, but also to staff of the relevant ministries and departments, politicians and parliamentarians.

For this purpose according to the recommendations of the monitoring mission Erasmus+ in the frameworks of implementation of TEMPUS IV projects “Development of Master’s Program in European and International Law in East Europe “InterEULawEast” by the representatives of our University there was prepared and published the Glossary of Terms of the Internal Market of the European Union in English (Odessa, 2016). Among the authors are professor Tulyakov V. A., associate professors Pashkovskiy N. I., Barskyy V. R., Katsyn M. E., assiatant Alekseeva I. M. The Glossary was highly estimated by the experts of European Union Universities. It was recommended for use during the educational programs on p[problems of European Integration and EU law.

In the frameworks of implementation of the TEMPUS IV projects “Development of Master’s Program in European and International Law in East Europe “InterEULawEast” on 4-5th July final coordination meeting was held (location - University of Maribor, Slovenia).

According to the results of the event, representatives of universities TEMPUS InterEULawEast project participants decided unanimously to recognize the successful achievement of project objectives.

Representatives of the consortium of universities have also decided to develop partnerships with a view on further implementation of programs and double degrees parallel, revitalization of academic exchanges, training of teachers and students.

There was an agreement reached on the completion of negotiations. Also the cooperation agreements with the Faculty of Law of the University of Maribor was signed. In the near future, our students and lecturers have the opportunity to organize joint research, academic exchanges with our Slovenian partners.